Pam moved to town in 2015, in the summer. A former member of INEO’s staff was closer to her family and said “Come! We’ll get you hook up. We’ll get 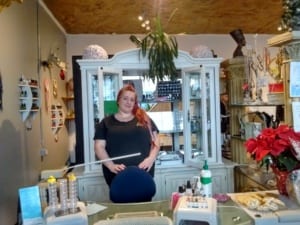 you some community resources and help you get established…” Her first appointment was in September 2015 and she already had a clear career goal. She just needed guidance.

“I went to my first intake meeting and from there the ball got rolling. I had a wonderful Case Manager (…) who helped me to get into Alter Ego for February.

So, within the first six months of being in Port Alberni, my goals were already being achieved by obtaining my nail technician certification and I completed that in June 2016, continued to work with INEO, completed another couple of courses supported by INEO to help better my career and make me more desirable in the work field.

I decided that it was a really difficult work field to get into without knowing people. So, I said: ‘I wanna open my own business, home-based’

By 2017, I started the process getting my paperwork for my name registration for my business. By mid-2017, I was approached by the owners of The Power of Three and asked if I wanted to work with them at their future space when they were in the process of opening.

I’d built a friendship with these ladies already. So, I jumped aboard, and in February of 2018, we opened our doors and I’ve been with them ever since.”

A nail technician’s soul
“I’ve been getting my nails done since I was 18 (…) When I was in grade 8, I was helping my auntie who was a co-owner of a nail salon and I’d go on weekends. I just loved the atmosphere.

When my life took a change, a drastic change, and I could no longer afford my own services, I started buying kits online and dabbling in it. I just really like doing it. I did my friends nails (…) I just didn’t have the qualifications to get a student loan and the community I was living in prior didn’t have a school (…) so I would have had to travel two and a half hours to school. When we moved to Port Alberni, the first thing I went to see was if there was a school nearby. Alter Ego came right up (…)

The children were finally old enough that I didn’t need to pay thousands of dollars in care and my hours for schooling were the same as theirs (…) The school was very flexible, so that if my kids had an appointment or something, I could still attend, and I could just do the hours at a later time (…)

I enjoy it! It’s like a makeover for some clients. They come, and they just don’t like their hands or their feet (…) and they leave with a smile and they come back and the praise… They feel better about themselves.”

The Blue Heron’s journey
“They (INEO’s staff) helped me with my schooling, and my extra courses, and then helped support me in writing a business plan. I do have some learning disabilities. So, paperwork isn’t a strong point for me. Terry (Deakin – INEO’s Owner) sat with me, helped guide me, and mentored me through the whole application process with the government as well as the in-depth business plan. We worked with my disability, PWD (application).

Don’t give up! Go to INEO! Discuss it! Just because you may not fit the general idea of the clientele that goes through, it doesn’t mean they can’t help you or help you get into the right direction with answers to your questions.”